Just when I thought the felt pancakes and fried eggs were the cutest things I had made in awhile, I decided to make a felt lunch, complete with a sandwich with all the toppings, a bag of chips and a bright red apple.

Thanks to Pinterest, I found the idea to make a bag of felt chips. After cutting out two ovals of yellow felt, I used my sewing machine to create ridges. I sewed rows of straight lines and then an additional line that outlined the whole thing. I also found an idea for tortilla chips, using off-white felt cut into triangles. 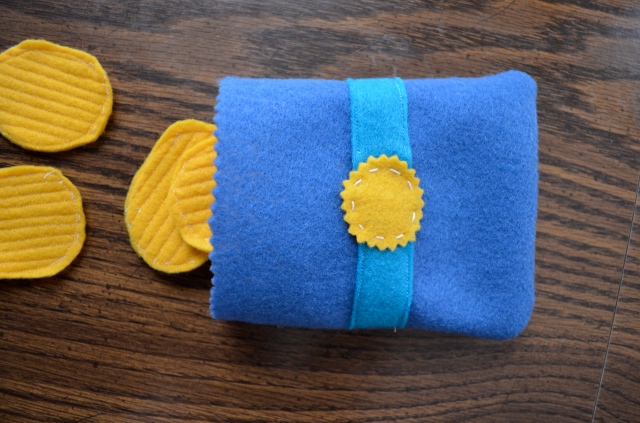 The felt chip bag took less than 10 minutes to make. After cutting out two rectangles, I used my pinking scissors to create the zigzagged edge. Then taking one of the rectangles, I sewed the strip of light blue felt to the right side of the fabric. Next, I hand stitched the the yellow sun (again, cut out with my pinking scissors).  Finally, I put the right sides of the two rectangle pieces together and sewed along the edge (you don’t need a large seam allowance with felt). Flipped it right side out and voila!

The felt apple was a little trickier. I found this tutorial online that I used as my guide. Basically, you need 6 pieces of red. (I just eye-balled the shape based on the tutorials’s template.) Putting rights sides together, I blanket-stitched the sections together. As you can see, this made it so you could see the red stitches. You can hide the stitches by using a sewing machine, but I think I prefer the exposed look. 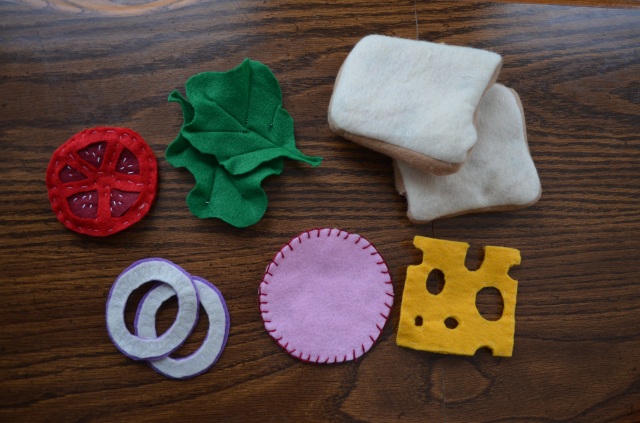 The felt sandwich is made up of several layers, each adding a pop of color. 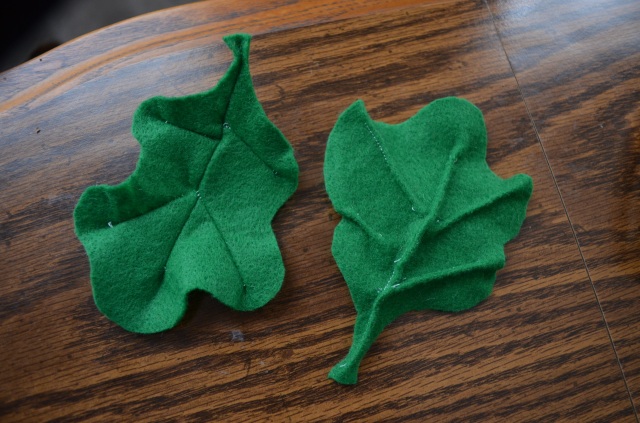 Starting with felt lettuce, I cut out a leaf-type shape out of green felt. Then, using my sewing machine, I stitch short lines to create veins.

For the felt tomato, I used three pieces of felt: two round pieces of bright red felt with sections cut out and and one round piece of the dark red felt, sandwiched between the other two. I used white thread to stitch seeds, and then I hand stitched everything together. The felt onions were made with a piece of purple felt and a piece of white felt. 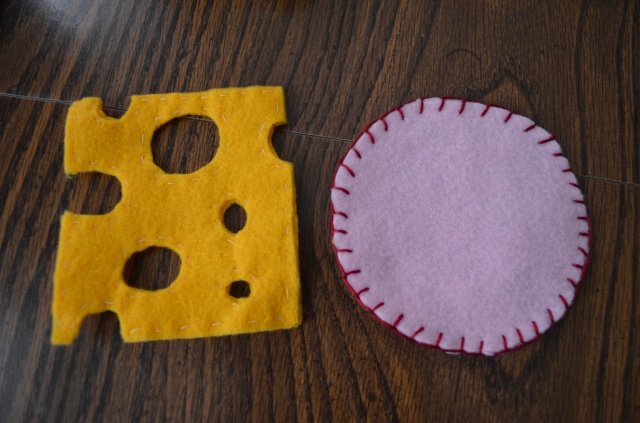 I spent an hour or so trying to come up with the right meat. Using pink felt seemed strange, but then an epiphany hit. If I blanket stitch the edge with red thread, I can create felt bologna. (And yes, I did just sing the Oscar Myer’s song to help me remember how to spell bologna.) The felt cheese was much easier. I simply cut out a few holes to make it look more distinct.

After making a version of the bread by blanket stitching two pieces of felt together, I decided that felt bread needed some dimension. It needed to seem more prominent than everything else. So I added some volume by creating a border of light brown felt and stuffing it with polyfill.

I simply adore how colorful the sandwich turned out to be. Plus, when combined with the breakfast items already made, you have even more possibilities for the type of sandwich your child could create. BLT, anyone?