I don’t shop at Anthropologie often, because let’s face it, who can afford it? But goodness, do I love that store. My roommate one day pulled out a napkin from the store that someone gave her as a gift, and it sparked my inspiration – a tablecloth made up of cloth napkins. So I went online and found these. The napkins come in a set of 6 for only $32. 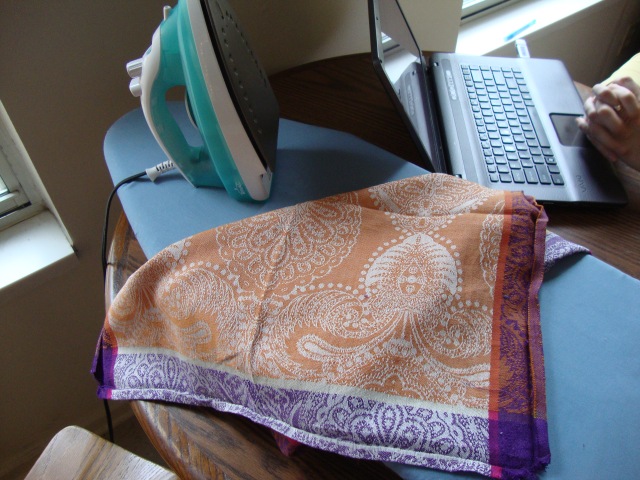 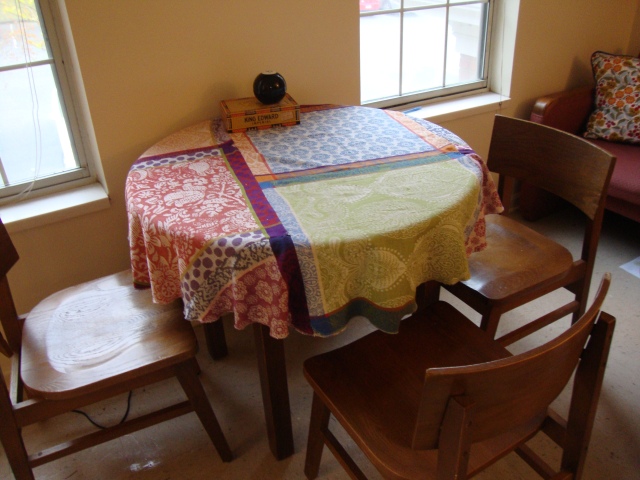 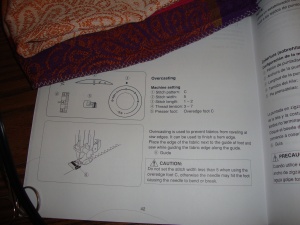 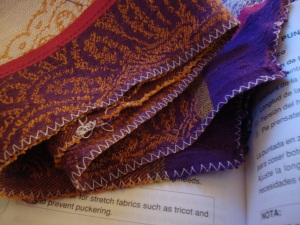 Once I removed the hem, I needed to secure the edges so they wouldn’t continue to fray. This is how I discovered the overcasting stitch feature on my sewing machine (I know this is probably something really basic, but you’ll have to bear with me. I’m relatively new to a sewing machine.) 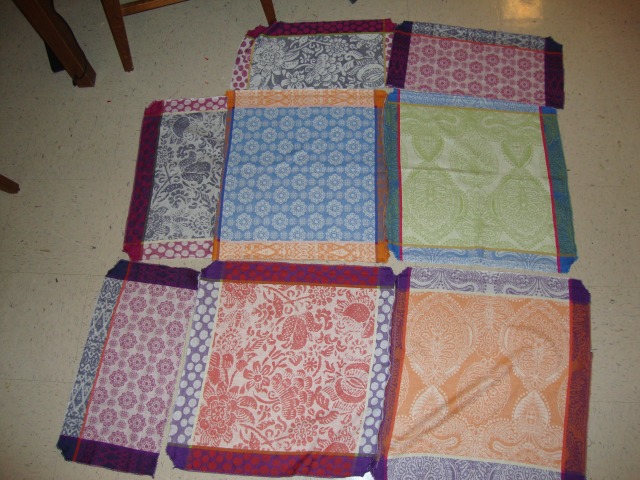 Once I had stitched over all the edges, I began to lay everything out. I needed to make a 50×50 inch square. So I kept 4 napkins whole and cut 2 napkins in half, placing those on the outer edge. If you notice, that leaves a 10×10 inch square missing, but I’ll come back to that later. 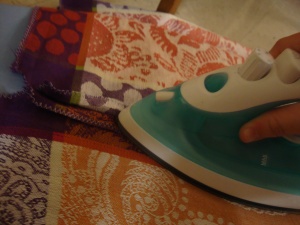 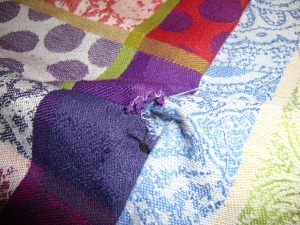 So I got to sewing each piece into place. The napkins’ corners were cut off, which caused a few hole to appear when sewing them all together. But I just decided to embrace the patchwork-ness of it all, and I simply hand sewed it together. 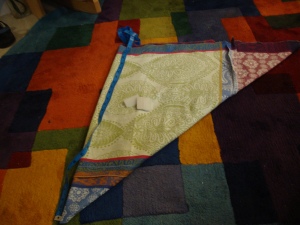 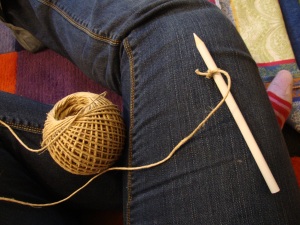 And then using the technique I learned on my last table cloth, I marked the fabric to cut out a circle. 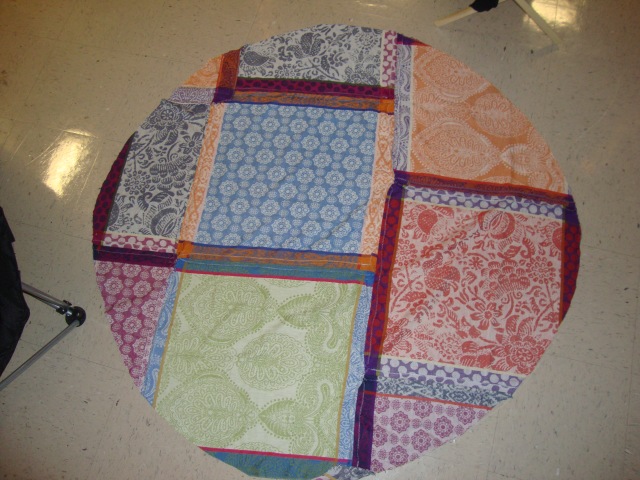 I found this fabric rather difficult to measure and cut. And as you can see, I was unable to cut a perfect circle. But since this is inspired by Anthropologie, why not accept their homemade philosophy. It’s homemade; it doesn’t have to be perfect. (It just has to look adorable!) 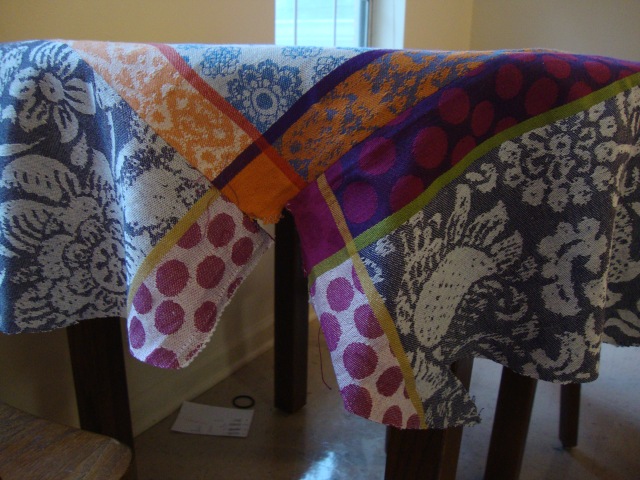 Now, back to one of my original problem – the 10×10 inch missing square. Well once the circle was cut out, the missing piece was easy to fix. I simply took  a piece of the scraps leftover from cutting out the circle and patchworked it into place using a simple straight stitch. 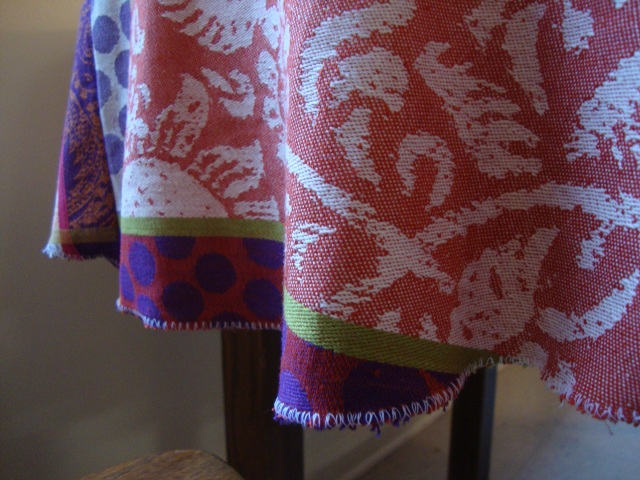 For the finishing touch, I decided not to hem the tablecloth, but instead to use the overcasting stitch again. I liked how it makes the fabric look raw, like it’s a scrap piece from another project. 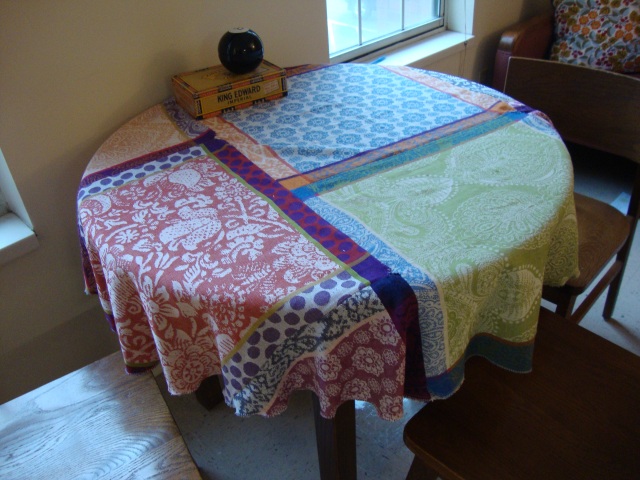 And that’s it. I’ve learned you don’t have to shell out a lot of money for Anthopologie products. You just have to buy the cheaper, simpler ones and make them into something extraordinary.